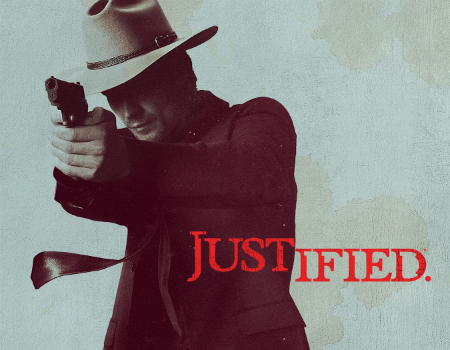 I admit I’m a bit of a latecomer to this show, but after a friend recommended “Justified,” I was hooked from the first episode. I couldn’t stop watching this show. I was compelled to start the next episode right after each ended, and was staying up until two or three in the morning a few nights before I realized it. It was like eating potato chips; well written Kentucky-style potato chips. Don’t look for those, they don’t exist.

“Justified” is based on novelist Elmore Leonard’s ‘Fire in the Hole,’ and stars Timothy Olyphant (Deadwood, Hitman) as Deputy U.S. Marshal Raylan Givens who, after a shooting incident in Miami, is transferred to his home state of Kentucky. Thrown back to Harlan County and a world he’d been happy to leave behind, Givens soon has to deal with his estranged father, Arlo (Raymond J. Barry), his ex-wife Winona (Natalie Zea), and an old acquaintance-turned-bank-robber, Boyd Crowder (Walton Goggins). The Deputy Marshal has to contend with old feuds, corruption, Harlan’s organized crime, as well as the Detroit Mafia who are looking for payback for Miami.

At a time where most of TV’s best dramas feature anti-heroes like Don Draper or Walter White, I found it refreshing that Raylan Givens, though he holds his own sense of justice and shoots from the hip (literally), is genuinely a good guy. With Olyphant’s take on the character and charm, you can’t help but like him. Givens is funny, smart but not a genius, flawed and make mistakes, and though he’s a marksman and a quick draw, he’s not a superhero. He’s just good at his job and tries to make the world right the best he can.

Not that the show lacks an antihero. Boyd Crowder, Givens’ sometimes ally/sometimes nemesis is a fantastic contrast to the Deputy Marshal. Crowder is cunning, equally charming and funny, and has a colorful vocabulary that can only be pulled off with a sophisticated southern flair. Throughout the series Crowder is constantly changing, redefining his view of right and wrong, all the while working to stay ahead of Harlan County’s ever-changing underworld machinations. Most of the time, I find myself rooting for both Givens and Crowder, even when the characters are at odds with each other.

“Justified” is a modern western at heart, and should be a template on how to do a modern western correctly. This show has fantastic pacing and engrossing story arcs with well written and acted main and supporting characters. “Justified” is almost at the end of its 5th season, and they’ve announced that their 6th season will be the last, so anyone interested has plenty of time to catch up before the next season’s premier. I have some guesses about the direction “Justified” will go, but every time I thought the plot would zig it would zag, so I’m excited to see where everything will end.

Catch up on past seasons of “Justified,” available to own on VUDU and watch the latest episodes of Season 5 the day after air.