As reboots, remakes, and long overdue sequels become the norm in Hollywood, the viewing public is starting to become tired with the lack of originality. It is also becoming the norm that every franchise is getting the reboot, no matter how young the original franchise is in relation to the proposed reboot. Many reboots then fall into the public opinion of being “too soon” and “unnecessary.” Thankfully, Predators does not fall into that line of thinking. The Predator franchise never really got off the ground after the original 1987 film, which spawned an unsuccessful sequel and two unsuccessful spin-off sequels. Predators injects new life into a stale franchise, as all good reboots should, and is a welcome return of the infrared-seeing, camouflage-wearing, beast-faced aliens.

Predators tells the story of eight strangers who arrive in a jungle, unaware of how they got there. They realize that they are not each other’s enemies, and that all but one of them is skillful in the use of deadly weapons. Adrien Brody is Royce, a mercenary who reluctantly becomes the group’s leader. He leads them through the jungle in hopes to finding a way out. But they soon discover that this jungle is unlike any other on Earth, and they are in fact on an alien planet. As they try to make sense of their surroundings, a presence makes itself aware to the group, and all discover they are being hunted for game sport by invisible creatures. Now they must stay together and fight their alien hunters in the hopes of surviving and escaping the planet.

The words “Adrien Brody” and “action star” are rarely spoken in the same sentence. However, as Adrien Brody has already proven his versatility across multiple genres (see Splice review), “action” is the only genre left on his checklist. Brody does his best Arnold Schwarzenegger impersonation from the original “Predator”. He effectively hones Schwarzenegger’s Dutch character, and adds a brooding, selfish layer to the character that makes him both liked and disliked simultaneously. Indeed, fans gave harsh criticism upon hearing of Brody’s casting, but much like Michael Keaton when he was cast in Batman and Bruce Willis when he was cast in Die Hard, his action star-turning performance is sure to quiet those critics. 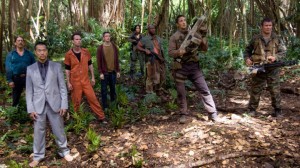 The rest of cast is a pleasant surprise, comprised mostly of little known but recognizable actors. Alice Braga offers an excellent multi-layered performance as Isabelle, a military sniper who struggles to hold on to her humanity. While everyone else becomes cold and callous given their grim situation, Isabelle fights to hold on to her compassion, which could ultimately bring her downfall. Laurence Fishburne makes a surprise cameo as Noland, a survivor of the planet who has adapted to the harsh life there. His nuanced and schizophrenic performance adds to the confusion and paranoia the world creates. If there is one downside to the supporting cast, it is that there is not enough screen time for producer Robert Rodriguez’s go-to guy, Danny Trejo. The world needs more Danny Trejo!

Predators is meant to serve as a continuation of the “Predator” and Predator 2 movies, quietly ignoring the Alien vs. Predator films. If anything, it is more a continuation of “Predator”, in the way that “Aliens” followed “Alien”. The title also serves as dual meaning to define the aliens who are hunting the group, and to define the group, who were predators themselves while on Earth. From a story and visual perspective, Predators mostly pays homage to “Predator”, arguably the best of the franchise. The jungle setting, the mystery of the unknown, a group of warriors being hunted, the struggle to survive against all odds, and the heart-pounding musical score are all elements from “Predator” that Predators calls upon. Even Brody’s climactic fight scene against the aliens harkens back to Schwarzenegger’s climactic battle from “Predator”. Even with all these homages, Predators still exhibits its own originality with its unique characters and story-line.

Predators exceeds all expectations as a worthy continuation of the franchise. The final scene perfectly sets up a much anticipated sequel. Adrien Brody is already in talks to return as Royce. For the franchise to successfully continue, the models established in “Predator” and Predators should be followed while continuing to up the ante and the danger. If the suspense and action can be maintained and expanded upon, then this franchise should carry on successfully. Predators is now available on VUDU to own or rent in SD, HD, and HDX.

Producer Robert Rodriguez (Sin City, Desperado) wrote the original screenplay for Predators over 15 years ago. At the time, 20th Century Fox found that the budget to make the movie would be too high. As technology and special effects have greatly improved since then, Fox decided to greenlight the project. The original script called for cameo appearances by Arnold Schwarzenegger’s Dutch character from “Predator” and Danny Glover’s Michael Harrigan character from Predator 2, but subsequent rewrites of the script dropped them.