The Expendables is the movie that action fans have been waiting for for almost 40 years. For the first time ever, Sylvester Stallone, Jason Statham, Jet Li, Dolph Lundgren, Mickey Rourke, Arnold Schwarzenegger, Bruce Willis, and more share the screen in a star-studded adventure that unites many of the big name action stars from the 70s, 80s, 90s, and 00s. The Expendables is an action-packed thriller with a healthy dose of guns, knives, and explosions, enough to tide over any fan of the genre. Now The Expendables is available on VUDU to own or to rent in SD, HD, and HDX.

Sylvester Stallone is Barney Ross, leader of a ragtag group of mercenaries dubbed The Expendables who have the skill and proficiency needed to solve any crisis—as long as the money’s right. Ross meets up with the mysterious “Mr. Church” (Bruce Willis) to accept a job of overthrowing General Garza (David Zayas), the corrupt dictator of the island of Vilena. With his second-in-command Lee Christmas (Jason Statham), Ross heads to Vilena to do reconnaissance on General Garza and his army. They meet their contact, Sandra (Giselle Itie), who gives them intel to take down Garza. During the mission, however, Ross and Christmas discover that the true threat to Vilena is ex-CIA agent James Munroe (Eric Roberts), the mastermind behind Garza’s evil doings. Things go wrong, and Ross and Christmas are forced to make an explosive escape. They try to bring Sandra with them, but she chooses to stay behind to fight for her people. Guilt-ridden over leaving her behind, Ross and the rest of The Expendables set off to Vilena to rescue Sandra and take down Garza and Munroe.

Another entry in the “aging action stars” genre, The Expendables doesn’t play off the fact that the heroes are past their prime. In fact, there is little (if anything) that can stop The Expendables from carrying out a successful mission. They are more “seasoned veterans” than “aging action stars” which makes it even more impressive during all the fight and action scenes. Stallone, pulling triple duty as actor-writer-director, has crafted an excellent film that keeps the viewer craving for more. As people saw in his last directorial effort, Rambo, Stallone isn’t afraid to play things down to appeal to a wider and younger audience. Like Rambo, The Expendables is full of blood, gore, and what has to be one of the highest body counts in cinema history. It is a welcome throwback to the action films of the 70s and 80s where muscle men with big guns and bigger attitudes didn’t let anything get in their way. 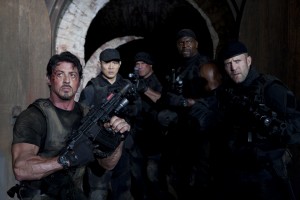 Other big name action stars were approached to be in The Expendables, but for one reason or another, they couldn’t be in the film. Had they been able to, then The Expendables would have also included Steven Seagal, Wesley Snipes, Kurt Russell, and Jean-Claude Van Damme to name a few. When The Expendables premiered in August 2010, audiences flocked to the theaters, eventually contributing to over a $100 million domestic box office. Jean-Claude Van Damme immediately stated his regret for turning down the movie, but he is hoping to rectify this, as he is in early negotiations to appear in the sequel. Other action stars said to be interested in the sequel include Wesley Snipes, Bruce Willis (this time in an expanded role), and Mr. T, though it is less likely that Snipes will appear given his recent legal troubles. As long as The Expendables can continue to unite the greatest action stars of the silver screen, then it has the potential to be a very successful film franchise.

The Expendables doesn’t try to be something it isn’t. It is an action film, plain and simple, full of explosions, car chases, gun fights, explosions, knife fights, fist fights, and explosions. The stunts and action sequences that are pulled off are remarkable and definitely get the adrenaline pumping. The seaplane escape sequence alone is well-worth the price of viewing, but thankfully, there are so many amazing moments that The Expendables in its entirety is worth it. Don’t miss The Expendables, as action movies like these only come along once in a great while.

Plans for a sequel to The Expendables were put in place seven months before the movie even premiered in theaters! It is rumored the Bruce Willis’s “Mr. Church” character will be expanded, and will potentially serve as the film’s villain.