Scott Pilgrim vs. the World is the kind of great film that is every fanboy’s dream come true. It’s a science fiction-fantasy-action-comedy-romance full of rock ‘n’ roll, video games, fighting, animation sequences, pop culture references, and 8-bit goodness. There’s so much awesomeness going on in this movie, it’s hard to even classify it under any specific genre. But perhaps it’s the blending of genres that makes this movie so amazing. It defies all conventions and lives in its own world. Scott Pilgrim vs. the World is not to be missed, and now it is available on VUDU to own or to rent for 2 days in SD, HD, and HDX.

Scott Pilgrim (Michael Cera) is your average twentysomething rock and roll bassist who just wants his band to make the big time. While dating high-schooler Knives Chau (Ellen Wong), he meets the girl of his dreams (literally) in Ramona Flowers (Mary Elizabeth Winstead). Conflicted over which girl to be with, Scott eventually chooses Ramona, but in doing so, he unleashes her seven evil exes. Now, with the help of his roommate (Kieran Culkin), his bandmates (Mark Webber, Alison Pill, Johnny Simmons), and Ramona, he must face off against the seven evil exes in a series of video game-style combat scenarios in order to win the right to be with Ramona. 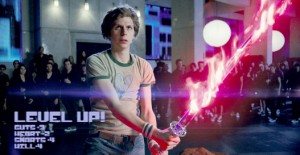 This movie is chock full of geekery that is the epitome of every fanboy’s deepest desires. It’s everything one could ever want out of Comic-Con rolled up into one great movie. Writer and artist Bryan Lee O’Malley’s “Scott Pilgrim” graphic novel series is so beloved by fans and critics alike, that when it was announced a movie adaptation was in the works, it lit up the Internet in a flurry of excitement. In July 2010, at San Diego’s Comic-Con, the Scott Pilgrim vs. the World panel performed to a standing room only audience. After the panel, some fans were invited to a sneak peek of the entire film. When it ended, word spread quickly that the film was pure genius, quickly becoming one of the most anticipated movies of the summer. Several Comic-Con friendly directors such as Kevin Smith, Quentin Tarantino, and Guillermo Del Toro praised and lauded the film as one of the most creative and original movies ever to come from a major Hollywood studio. But then something happened. When the movie premiered, very few people went to see it. To say the opening weekend box office was underwhelming would be an understatement.

Many people scratched their heads as to what went wrong. It was certainly no fault of Universal Studios, who spent a reported $20-40 million on marketing. They did everything they could to promote the movie, but in the end, very few showed up. At a special screening of the movie, director Guillermo Del Toro had some rather harsh and colorful remarks to the movie going public, stating that people shouldn’t complain when Hollywood puts out bad movies, because when they put out good movies (like Scott Pilgrim vs. the World), no one goes to see them. 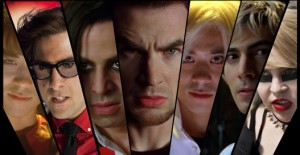 It’s a shame this gem of movie didn’t get the love and attention it deserved during its theatrical run, but thankfully, many fans are coming out in full force to support the home video release of Scott Pilgrim vs. the World. Michael Cera is proving to be Hollywood’s go-to guy for roles that call for young men who are nerdy, socially awkward, insecure, and incompetent when it comes to dating. He does it so effortlessly that he’s quickly becoming typecast in that role. But if it isn’t broken, don’t fix it. Cera pulls off his role with perfection, as his mopped-topped Scott ambles and stumbles with pure comic timing. Mary Elizabeth Winstead’s quirky Ramona oozes with cuteness and charm. Kieran Culkin, now well out of the shadow of his older brother, is a consummate scene stealer. He shines in his egotistical portrayal of Wallace, Scott’s roommate, with his snarky and pithy dialogue and wit. The movies is full of welcome cameos, particularly from Chris Evans and Brandon Routh (each playing an evil ex), typically cast as Hollywood pretty boys and action stars who here play on those roles with added elements of smugness and vanity to complete their villainous personae.

It is the overall look and sound of the movie that is the really eye and ear candy. The intentional use of 8-bit special effects and music are some of the highlights that bring out the inner geek in all of us. The Street Fighter-esque battle scenes and video game voice-overs truly make this movie one of a kind. This is the first great film to convincingly bring both a comic book and video game sensibility to a movie. Where countless other films have tried and failed, Scott Pilgrim vs. the World is now the benchmark of how to adapt comics and video games for the big screen.

Blink and you’ll miss him, but thankfully with VUDU, you can pause without loss of image clarity. At the 1 hour, 1 minute, and 7 second mark, “Scott Pilgrim” creator Bryan Lee O’Malley makes a brief cameo as the man on the far left, chatting up the blond-haired woman.