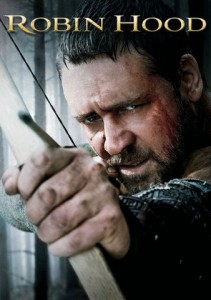 This isn’t your father’s Robin Hood. In fact, this is a Robin Hood that no one has ever seen before. Gone are the green tights, gone are the Merry Men. This Robin Hood tells the story of how Robin became an outlaw, loved by the people, and the scourge of King John and the Sheriff of Nottingham. The traditional story of Robin Hood stealing from the rich to give to poor, taking on the corrupt Sheriff of Nottingham, and rescuing Maid Marian is thrown to the wayside. This movie is the story of everything that happened before that.

Russell Crowe is Robin Longstride, a typical archer serving alongside King Richard the Lionheart (Danny Huston) in the Crusades. He and his friends want nothing more than to return home to England. When the King is assassinated, and the King’s knights are slain, Robin and his men see the opportunity to pose as the knights in order to secure passage back to England. They deliver news of the King’s death, and Prince John (Oscar Isaac) is named the successor. However, Prince John’s best friend, Godfrey (Mark Strong), is behind a plot to overthrow the king. Godfrey also recognizes Robin as an imposter, as Godfrey was responsible for the deaths of the King’s knights.

Robin and his men travel to Nottingham to fulfill the dying wish of one of the King’s knights, Robin Loxley (Douglas Hodge), to return his sword to his father, Walter (Max von Sydow). Robin meets Marian Loxley (Cate Blanchett), Robin Loxley’s wife, who is distrustful of Robin Longstride’s intentions. However, Walter believes Robin Longstride to be a good man, and convinces him to pose as his dead son, in order to keep his estate intact. He quickly becomes a man-of-the-people, gaining Marian’s favor, bringing hope to the poverty-stricken estate, fighting against a corrupt Church and King, and uniting the English to fight against traitors. 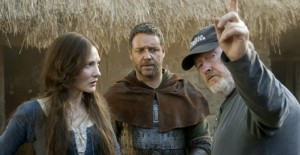 Director Ridley Scott delivers a true epic here, as is his usual modus operandi. The scale of everything brings a monumental action-adventure film that is solidly executed on all levels. The A-List cast headlined by Russell Crowe and Cate Blanchett deliver amazing performances. Their interpretations of their characters deliver an all-new depth. Crowe’s Robin Hood isn’t smooth and dashing—he’s a rogue and deserter, initially in it for himself. Blanchett’s Marian isn’t the damsel in distress—she’s strong-willed and can be a force to be reckoned. The scenery and set design seem almost too good to be true, completely taking the audience back to medieval England. In today’s modern times, it is truly amazing to see places in this world that are available to film movies like this.

The most interesting concept in this movie is the portrayal of The Sheriff of Nottingham. The Sheriff of Nottingham, who has long been depicted as Robin’s main adversary, really takes a backseat in this story. He’s rarely in the film, and when he is, he’s hardly depicted as the villain he usually is. He’s more ineffectual than anything else, and people hardly cower in his presence. However, the film does progress his character nicely, and sets him up in the end to become the villain we all know.

On that note, this film screams sequel! Now that Robin Hood has been set up, it would be great to see director Ridley Scott’s take on the traditional Robin Hood story. The world he’s established would be a pleasure to revisit. Robin Hood is the role Russell Crowe was born to play.

Robin Hood is now available on VUDU in both the original Theatrical version, and the Unrated Director’s Cut. As an added bonus, both versions are available for 2-Day rental. As well, when you stop by your local Wal-mart and purchase a specially marked version of Robin Hood on DVD, you get two free VUDU rentals.

The original vision for this movie focused on the Sheriff of Nottingham being the hero, painting Robin Hood as an anarchist and terrorist. Director Ridley Scott and star Russell Crowe were immediately drawn to the idea of making a Robin Hood movie, but disliked the script. The movie went through several rewrites and several writers before the story evolved into the idea of telling Robin Hood’s origins.