Before Pixar, before DreamWorks Animation, in the early days of cinema, only one American company was continually releasing feature length animated movies: Walt Disney Pictures. Rival animation company Fleischer Studios tried their hand at feature length films, but after producing only two, their feature division shut down, unable to compete with Disney’s popular films. For decades, Disney controlled the market on feature length animated movies in the United States, and in those years they gave us “Snow White and the Seven Dwarfs”, “Pinocchio”, Fantasia, and of course, Bambi. For the first time ever, Bambi has been digitally restored and remastered in high definition. It is now available to own on VUDU in SD, HD, and HDX!

Bambi tells the story of the titular character, a white-tailed deer who has just been born. All the woodland creatures of the forest come to greet their new prince. Bambi becomes friends with a rabbit named Thumper and a skunk named Flower. Together, they explore the forest they live in. Bambi’s mother also warns him to beware man, and that they must be careful when wandering into meadows, away from the safety and protection of trees and bushes. As Bambi grows older, he meets a female fawn named Faline, and learns about the changes of the seasons when winter arrives. But when man arrives, they take Bambi’s mother away from him. Now, Bambi’s father, The Great Prince of the Forest, returns to raise his son, and as spring arrives, Bambi learns that as seasons change, so too do he and his friends. 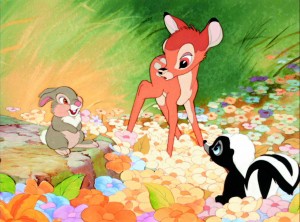 Bambi is one of the great animated titles in all of film history. It was voted as the third best animated film in “AFI’s 10 Top 10” awards ceremony in 2008, and the villainous “man,” whom we never see, was voted the twentieth worst villain in cinema history at “AFI’s 100 Years… 100 Heroes and Villains” awards ceremony in 2003. Disney has done a remarkable job in their digital restoration of the film, meticulously repairing almost seventy years of wear-and-tear. In an age where computer animation dominates the cinema landscape, it is refreshing and invigorating to be transported back to a time where cartoons were made from cel animation, hand drawn one frame at a time. The movie looks the best it ever has, probably even better when it appeared on opening night back in 1942. The phrase may be cliché, but it is especially true as it relates to this film, but “they just don’t make them like they used to.”

Bambi was a turning point in the early days of animation for Disney. All of Disney’s previous movies had utilized caricatures of animals, and for the first time, Bambi was basing their animals on real life versions. Walt Disney had animators study the movements and interactions of the animals so that the movie representation would be as accurate as possible. Disney even went so far as to create his own studio zoo so that animators didn’t have to go far. Disney’s push for realism, however, caused repeated delays for the movie. Bambi was meant to be the follow-up to “Snow White and the Seven Dwarfs”, but it was delayed for five years due to the long production. The movie was an initial financial failure, thanks in no small part to the emergence of World War II. However, despite the setbacks it caused, the learning experience Disney and his team gained from making Bambi allowed them to improve their techniques on all subsequent films. When the movie was re-released in 1947 after the war ended, Bambi was quickly able to recoup its cost.

Bambi holds up surprisingly well for a seventy year old movie. Its theme of man’s encroachment and effect on nature is as relevant today as it was back then. The film is a must for any fan of cinema history, and of course, for fans of animation. Bambi can be enjoyed by people of all ages, and makes for a perfect family movie watching experience. Own Bambi now and watch this classic tale over and over again.

Bambi was originally intended to be a live action film when it was set up at MGM for director and producer Sidney Franklin. Upon seeing “Snow White and the Seven Dwarfs”, Franklin realized Bambi had better potential as an animated film, as the current technology just wasn’t good enough for live action, so he sold the story to Walt Disney.