Writer-director Chris Terrio’s first (and thus far only) feature film, Heights, is a bold examination of the lives of five interconnected New Yorkers set over the course of 24 hours. Adapated from Amy Fox’s one-act play of the same name, the movie is a poignant, often gut-wrenching, journey into these people’s souls, tearing away at the facades they present to the world, forcing them examine who they really are. 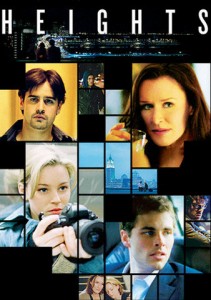 This little-known movie might have easily been overlooked had it not been for the recommendation of a co-worker’s parents. It is passionately acted, anchored by a strong cast lead by Glenn Close. Close is Diana Lee, a famous stage and film actress struggling to accept that her husband is having an affair. Her daughter, Isabel (Elizabeth Banks), is discovering that her engagement to Jonathan (James Marsden) might be a mistake. Isabel tries to make things work, but a secret from Jonathan’s past pushes him away. Peter (Jonathan Light) is a journalist whose latest subject also happens to be a former lover. Alec (Jesse Bradford) is an aspiring actor who realizes his world just might start crashing all around him. As the day unfolds, their stories continue to cross paths, ultimately forcing them to reconsider the lives they chose to live.

Ensemble dramas with interwoven stories require a delicate balance of story, acting, and editing. One story cannot overpower another, and all stories must build until they collide with each other. Heights masterfully unfolds their stories with a beautiful and natural flow that pulls the audience into the characters’ world.

Terrio brings an elegance to the characters rarely found in directorial debuts. His choice of long takes and fluid cinematography keeps the audience front and center to the disharmony and anguish that unravels. He never lingers too long, yet always keeps us wanting more.

Heights is the kind of honest and simple film that is rarely seen anymore. It is refreshing to see the humanistic side of complex characters who don’t succumb to stereotypes and one-dimensionality. Heights makes a perfect addition to your digital collection, and can now be owned on VUDU for under $5.

Heights was the penultimate film in legendary producer Ismail Merchant’s nearly 50 year career. He died one month before the film had its US theatrical premiere.