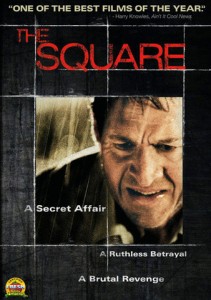 Stunt coordinator-turned-director Nash Edgerton’s feature directorial debut The Square is a taut and complex crime thriller that would make Hitchcock proud. Co-written by his brother Joel Edgerton, the movies unfolds at a steady pace that serves to build the suspense as each scene progresses. Never forced, the story begins with a small simmer that gradually builds to a scalding boil.

The Square is a lesson in tension that many Hollywood filmmakers should look to as example. There are no big name stars, there are no special effects, there is no multimillion dollar budget—there is only brilliant acting, gritty and dark cinematography, and a story that progresses naturally without the need to blow something up every few minutes. When the action does happen, it is a result of the characters and their actions, and not because the film is pandering to the audience.

Ray Yale is a construction foreman having a secret adulterous affair with his neighbor across the river, Clara, the wife of a small time criminal. They plan to run away together, but Ray insists on having plenty of money to fund their escape. He takes kickbacks on the job, but the money isn’t coming fast enough. Clara discovers her husband’s stash from a recent theft, and proposes to Ray they steal it for themselves to start their new life. Ray agrees, but only if they burn down her house so that it appears an accident. However, the perfect plan they set in motion soon begins a downward spiral that results in murder, betrayal, blackmail, and more murder. Ray and Clara’s lives soon fall apart, as do the lives of those around them. 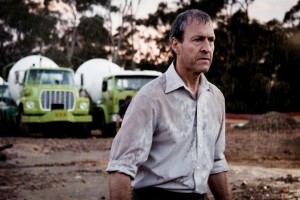 While scenes can take a while to move the film along, the slow pace serves to establish the mood and intrigue that plagues Ray and Clara. The Square, thus, is a prime example of noir. The seeds of deception, anxiety, and paranoia are planted early on, building and building until the shattering conclusion. The movie contains the conventions of a classic noir: a man in trouble, a femme fatale, and chilling underscore, and a dark color palette. Everyone is a suspect, and no one can be trusted. But while it contains all these conventions, it also turns them on their head. The beautiful and haunting score of Francois Tetaz is never overplayed. In fact, music takes a backseat to the narrative and only plays sparsely during the tensest moments. The lack of music draws us into the world, and when it does appear, it sends a chill down our spine.

It is rare in cinema to have such characters as fully fleshed out as they are here. Even the minor characters are multilayered and multifaceted. No one is reduced to being a one-dimensional stereotype to conveniently move things along. This film is a study in character development. It is a shame that its limited American theatrical run went almost completely unnoticed. Thankfully, the good people at Sony Pictures Classics have seen fit to make sure American audiences can enjoy what Australians enjoyed over two years ago.

VUDU customers can now experience the thrills and chills of The Square for under $10.