If someone you loved was wrongfully incarcerated, what would you do to get them out when all legal options have run out? That is the very question posed in The Next Three Days, the latest film from Academy Award winning director Paul Haggis. The Next Three Days is a taut, frantic, and highly suspenseful movie featuring amazing performances with twists and turns around every corner. Make sure to pay close attention to all the little details, as everything happens for a reason. This thrill-a-minute movie will have you on the edge of your seat all the way through the end of the movie, something that most thrillers rarely do anymore. The Next Three Days is now available on VUDU to own, or rent in SD, HD, and HDX!

The Next Three Days follows John (Russell Crowe) and Lara Brennan (Elizabeth Banks), a married couple with a young son named Luke (Ty Simpkins). On a seemingly normal day, the police raid the Brennan’s home, arresting Lara for the murder of her boss. Three years later, Lara is still in the county jail awaiting an appeal on her case. When the appeal is denied, Lara and John must face the fact that Lara will be in prison for life. However, John cannot accept that fact, and begins looking into the possibility of breaking Lara out of prison. He meets with Damon Pennington (Liam Neeson), a man who has escaped prison seven times. Damon tells John that every prison has a weakness and that John has to find it. He also says that in order for John to proceed, John must be willing to do anything or else there is no chance he will succeed. As John begins to formulate his plan, he’s met with the unexpected news that Lara will be transferred to a new prison. As time runs out, he puts his plan into action, hoping that he will be able to pull off this insurmountable feat. 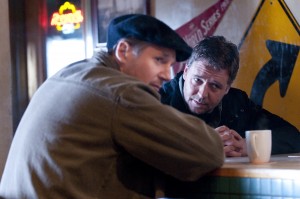 Paul Haggis brings a realistic view to cinema. Often, movies are meant to be escapist forms of entertainment, not often grounded in reality. Even biographies and movies based on fact take artistic liberties with the subject matter, all in an effort to make the movie more appealing to audiences. The realism he brings to movies makes it seem like all the events that are happening could actually happen to you or anyone you know. This adds a great amount of tension and suspense because he focuses on real people being asked to do superhuman tasks. He is nuanced and methodic in his representation of this, and it only serves to heighten and improve the quality of the movie. The Next Three Days becomes more than just another movie thrillride because Haggis’s style keeps the audience hoping and guessing if these “real” people will be able to do the otherwise impossible.

Of course, Haggis’s element of realism means nothing if he doesn’t have the actors who can convincingly play “real” people. On paper, the casting choices would appear odd. Russell Crowe is known for his larger-than-life characters and Elizabeth Banks plays more to a comedic audience. However, as any good actor should be able to do, Crowe and Banks perform admirably well as “real” people. Russell Crowe has never seemed more vulnerable and scared, unsure of how he is going to abandon his way of life to free his wife. His inner turmoil and anguish is plastered on his face and in his mannerisms. Elizabeth Banks, who traditionally plays the attractive female lead, abandons her looks as a downtrodden prison inmate. Primarily known for her comedies, her dramatic portrayal of a woman who’s lost everything is a true revelation to the depth of her acting abilities. The scene between Crowe and Banks where she learns that her appeal has been denied is one of the most harrowing and dramatic moments in the film. Not a single word is spoken during this brief scene, but the emotion they both convey speaks louder than any dialogue could. Both of their performances are to be praised. It is a shame that neither of them were recognized during the recent awards season. 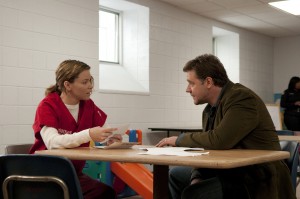 The Next Three Days may have been overlooked by critics and audiences alike during its theatrical run last November, but that doesn’t mean this movie isn’t worth watching. Quite the opposite, it is a great movie that will surprise many who might not have thought much of it on first glance. Even though it is yet another addition to the Hollywood remake machine, it is one of the movies that makes sense to have been remade. The original French film titled “Pour Elle” (aka “Anything for Her”) on which it is based has little to no exposure in the United States, and even if it did, its lack of any name recognizable stars would likely not draw much of a crowd. Given that, The Next Three Days gets a pass from being scrutinized as yet another remake, but also because it is just a great movie that is sure to entertain.

Fred Cavayé, co-writer and director of the original French film, was excited to hear his movie was being remade for an American audience. He looked forward to “being a spectator at his own film” and marveled at his name appearing alongside that of Russell Crowe.