It’s extremely hard and asking a lot for one actor to carry the weight of an entire film on his or her shoulders. The actor needs to be engaging and have the personality and charisma to keep the audience intrigued by their performance. Philip Baker Hall did it in “Secret Honor”, Tom Hanks did it in Cast Away, Sam Rockwell did it in Moon, Ryan Reynolds did it in Buried, and now James Franco does it in 127 Hours. The latest film from Academy Award winning director Danny Boyle, 127 Hours is a harrowing and distressing account of one man’s struggle for survival. 127 Hours is now available on VUDU to own or to rent in SD, HD, and HDX, and it is available 28-days before Netflix!

127 Hours tells the true story of Aron Ralston (James Franco), an outdoors enthusiast who always goes to the extreme. His carefree and cavalier attitude make him ignore some of the rules of outdoor life: always be prepared and always tell someone where you’re going. During a routine biking and hiking trip through the desert, he encounters two lost women, Kristi (Kate Mara) and Megan (Amber Tamblyn). After guiding them to where they want to go, he sets off into the desert on his own. As he descends into a crevasse, a rock gives way and he falls. The rock falls onto Aron’s arm, pinning it against the crevasse wall. Unable to free himself, Aron attempts many different ways to free himself. But with each attempt unsuccessful and the days passing by, he soon realizes that his life might be in serious jeopardy unless he can find a way to escape.

Spoiler alert: Unless you’ve been living in a cave, cutoff from the Internet the last ten years, then it should come as no surprise that Aron does escape and get rescued. After all, how would he have been able to share his story? Admittedly, 127 Hours is a somewhat confusing title. It does not refer to the amount of time in which Aron is trapped by the rock. Rather, it refers to the amount of time from when he left his house to the time when he was rescued. Aron’s ordeal is expertly captured by the beautiful cinematography of Enrique Chediak and Anthony Dod Mantle. The juxtaposing shots of the vast and empty desert edited together with the tight and claustrophobic space of the crevasse create an atmosphere of dread and impossibility. It is beautiful and haunting at the same time, as the splendor of nature is also the deadly foe that Aron must fight against.

Full credit goes to James Franco for an engrossing performance that has earned him many well-deserved accolades from critics and cinema guilds. He is captivating as Aron and convincingly displays a wide array of emotions including joy, regret, self-assurance, anger, anguish, and fear. His character is actually a bit annoying up until he gets caught under the rock, as he displays a high-level of narcissism. But once he’s caught under the rock, his narcissism quickly flies out the window and for the first time we see his humanity. Underneath his layers of vanity and arrogance is just a regular guy with the regular problems everyone faces. As the hours and days go by as he’s trapped under the rock, he recounts his life, reliving his regrets. He uses his video camera as a diary, chronicling what is happening to him, but also sending his last wishes and messages to his family. It’s a poignant and emotional moment to see a man who thought he had everything now have nothing. 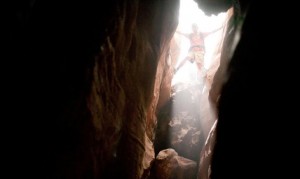 Of course, the one scene that has everyone talking is the moment where Aron cuts off his arm. While there have been reports of people vomiting and requiring medical attention after watching the scene, this reviewer finds the entire scene to have been blown out of proportion. Yes, it is bloody, and yes it is graphic, and yes, this reviewer did feel a bit queasy during the first viewing, but it is no more graphic that what people would see in a carnage-filled action movie. The scene lasts only a few minutes and there is enough editing involved that the audience doesn’t see everything. It’s a deeply moving scene and definitely James Franco’s defining moment in the film.

127 Hours is a thrilling and effective piece of cinema, especially when the outcome is already known. With excellent acting, impressive cinematography, and a riveting musical score, 127 Hours is well worth the watch. As award season movies finally make their way to home video, it will finally be easy to see why this movie ended up on so many critics’ top picks for 2010. James Franco, who doesn’t shy away from acting in anything, has finally had the breakout performance that will make him Hollywood’s next leading man.