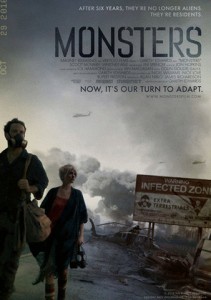 It has always been common for writers, actors, and cinematographers to branch out and try their hand as film directors. Several have gone on to do so with great success. In fact, it’s becoming so common that people from other fields are dipping their toes in the directing waters as well: choreographers, stunt coordinators, and visual effects artists to name a few. Gareth Edwards, a little know visual effects and digital artist, is the latest such person to take a chance in the director’s chair. His feature directorial debut, Monsters, is an odd yet brilliant marriage between love story, survival story, and alien invasion.

It is immediately established that six years ago, a NASA probe crash landed in Mexico carrying alien life from within our solar system. North America has been drastically altered, as the alien life forms (dubbed “the creatures”) have been contained in Mexico in a quarantined area known as “The Infected Zone.” The United States and Mexico have both constructed giant walls to keep “the creatures” contained within “The Infected Zone.” As this happens, a photographer named Andrew Kaulder (Scoot McNairy) who chronicles the aftermath of alien attacks is instructed by his employer to escort his daughter, Samantha Wynden (Whitney Able), back to the United States. She has recently been injured, and Andrew is told to get Samantha to a boat that will give her safe passage home. When they miss their opportunity to take the boat, they must travel through “The Infected Zone,” risking life and limb to get back home safely.

Monsters is at the same time masterful, suspenseful, and poignant. What is most interesting is that for a majority of the film, the aliens rarely make an appearance. Instead, the film follows the developing relationship between Andrew and Samantha. They are two mismatched people who are brought together under extreme circumstances. Andrew is clearly annoyed at the fact that he has become a glorified babysitter to get his boss’ daughter home. He wants nothing to do with Samantha, only wanting to focus on his job with the hopes of a big break. Samantha, however, doesn’t want to be seen as the stereotypical rich man’s daughter who gets by on her father’s money. But from their adversity eventually grows a great friendship out of the necessity to survive. They quickly realize they must rely on each other to get home, and as time passes, their relationship deepens into something more.

Actors Scoot McNairy and Whitney Able play wonderfully off each other. There is a real progression and believability in their relationship that forces the audience to become emotionally invested in them. We root for them to make it home safe and sound, and to live a happy life together. With every step they take on their perilous journey, we hope that the next turn around a corner won’t be their last.

Director Gareth Edwards wears many hats in his feature debut, not only as director, but also as writer, cinematographer, and visual effects artist. He accomplishes each role with style and finesse, coming off as someone who has been in his craft for decades. As Hollywood attempts to cram more and more CGI down our throats, it is a pleasure to become immersed in a film that doesn’t rely on CGI to carry it. The sparse use of CGI only serves to enhance its presence when it does appear. It is some of the most realistic CGI to appear on film, so to learn that this film was made on a shoestring budget of only $15,000 is to truly marvel at the quality of all aspects of the film.

Monsters is a must-see for those intrigued by the notion of Before Sunset meets “Jurassic Park” and District 9. If anything, it is worth it to see the amazing cinematography, most of which was shot guerilla-style on location in Central America, Mexico, and the United States. Now you can watch Monsters on VUDU from the comfort of your home before it hits theaters at the end of October.

While Scooter McNairy and Whitney Able are the only two credited actors, the film employed the work of hundreds of extras as the people they meet along the way. The extras who were featured were often people who just happened to be at that location when the movie was being filmed.