ALL ABOARD THE HYPE TRAIN

As 2018 begins to draw to a close, we turn our eyes (and our weekly entertainment news updates) to the future, with trailers, teasers, and other tantalizing tidbits of what we’ll be watching in 2019 and beyond. Read on for the latest looks at what’s coming down the pike.

No, not that RocketMan. After sharing a screen with Sir Elton John in 2017’s Kingsman: The Golden Circle, Taron Egerton will be stepping into the immaculately tailored shoes of the Pinball Wizard himself in Rocketman, an-out-of-this-world retelling of John’s life in the limelight. If the new teaser is any indication, the film will be a song-studded blend of fantasy and reality à la 2007 Beatles jukebox musical Across the Universe.

Speaking of big (or at least memorable) shoes to fill, Tom Hanks looks pleased as punch to be donning the signature sneakers of beloved children’s entertainer Mr. Fred Rogers in a newly released set image. Hot on the heels of the acclaimed Rogers documentary Won’t You Be My Neighbor?, the unnamed upcoming biopic featuring Hanks-as-Rogers being profiled by a reporter is slated for release in October of next year. 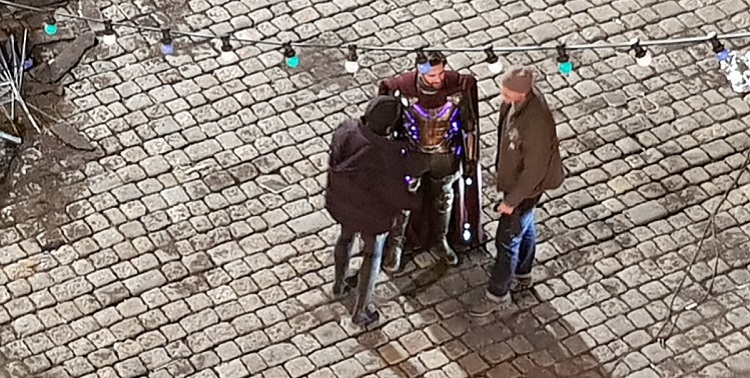 In other first look news, fan-favorite Spider-Man villain Mysterio can be seen (sans iconic fishbowl helmet) in leaked photos from the set of Spider-Man: Far From Home, set to release after next year’s Avengers 4. The lack of headgear (possibly to be added in post) turned out to be a blessing in disguise, as it confirms Jake Gyllenhaal‘s long-rumored appearance as the flamboyant master of illusion.

Just weeks before the reboot’s hair-raising debut, a new clip from Halloween (2018) has dropped that shows Jamie Lee Curtis‘s Laurie Strode engaging in a long-awaited rematch with masked killer Michael Myers (portrayed by Nick Castle, also reprising his original role). In a taste of what audiences can expect come October 19, the clip shows the now older Laurie defending her family from the resurrected Myers with… mixed success.

At a weekend birthday party for Pitch Perfect franchise alums Anna Camp and Skylar Astin, the cast of the musical mashup series gave a not so subtle hint that there may be another sequel in the works (despite the third film being billed as a trilogy conclusion). The actors took several pictures holding up four fingers, and while there has been no official announcement, the seemingly intended message is enough to get fans practicing their harmonies.