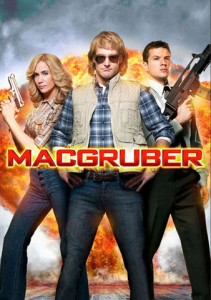 It has been ten years since a movie based on a Saturday Night Live sketch hit the big screen, and it has been 18 years since any of them was a critical and financial success. Unfortunately, MacGruber falls into the category of critical and box office failure. In fact, most people did not get a chance to see it, as the movie was in theaters for only a few weeks before being pulled for poor performance. It wasn’t for a lack of trying. MacGruber has a rabid fan base, its sketches on SNL are some of the best performing, and Universal spent plenty of time and money on advertising. It was intended to be one of Universal’s tent pole summer flicks. It is hard to know where things went wrong because MacGruber is an entertaining action-comedy and definitely one of the better SNL adaptations.

For those not in the know, MacGruber (yes, that’s his complete name, like Cher or Madonna) is the United States’ top military agent, somehow bumbling his way to success. He is an obvious parody of MacGyver, the titular character of a 1980’s action TV series about a spy who could take whatever was around him and use it for a weapon or a means to escape. MacGruber plays on this concept by combining everyday objects into absurd concoctions that never seem to work.

The film finds MacGruber (Will Forte) being called out of retirement to take down supervillian Dieter Von Cunth (Val Kilmer) who has just obtained a nuclear warhead. Col. Jim Faith (Powers Booth) and Lt. Dixon Piper (Ryan Phillippe) enlist MacGruber to stop Cunth from retrieving the bomb’s access codes. MacGruber also sees the mission as an opportunity to exact revenge on Cunth, the man who killed his fiancée. After his plan to assemble a super team goes hilariously wrong, he is nearly removed from the mission until Lt. Piper joins the team, as does Vicki St. Elmo (Kristen Wiig), MacGruber’s long time friend. What follows is a series of comical and riotous situations as MacGruber and team take on Cunth and his henchmen. 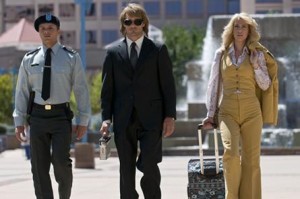 The movie is an unexpected mashup of action and comedy. The comedy plays mostly on the awkward situations that MacGruber gets in, and features a high amount of crude bathroom humor. On the action side, things are excessively bloody, much more than what would be found in a normal action comedy. However, the excessiveness becomes the comedy as it plays out as over-the-top. The visuals and humor in this movie are not for everyone, but if the previous elements appeal to you, then you are in for a treat with MacGruber.

Will Forte comes into his own with MacGruber. Having previously only been cast in supporting roles in film and television, Forte proves he has the comedic chops to carry a movie. Kirsten Wiig is just waiting to explode as the next funny lady in Hollywood, and her performance as Vicki proves that La La Land should not wait much longer. The funnier parts of the movie come in the choice to cast Val Kilmer, Ryan Phillippe, and Powers Booth in the supporting roles. All three are well-known dramatic actors who would, at least on paper, seem out of place in this kind of flick. However, all three slip quite comfortably into their characters, never taking things seriously, and having a good time with the funny and raunchy material. One scene with Ryan Phillippe will never have you looking the same way at celery sticks again!

Critics often forget that movies are made for a specific audience. It is the critic’s job to take that into consideration when reviewing a movie. Yes, a movie still needs to hold up as movie itself, but a critic should not fault a movie just because it is not their cup of tea. With that in mind, MacGruber may not be the best film of all time, but it is perfectly fun way to spend an hour and a half. Its side-splitting antics and over-the-top scenarios make MacGruber a must-see for anyone who’s an SNL fan.

MacGruber is now available on VUDU in both Theatrical and Unrated versions. Go to “Explore Catalog” and select the collection “SNL Stars on the Big Screen” to see MacGruber and a selection of flicks starring SNL alums.

It was revealed in a SNL sketch that MacGruber’s long lost father is none other than MacGyver himself!