The contest is afoot, so put on your thinking cap (and your coloring socks): now’s your chance to win! Pick your favorite coloring sheet from below, and once you’ve added your unique touch, take a pic (for posterity), and upload it here for your chance to win one of five prize packs stuffed with Sherlock Gnomes goodness. 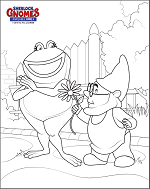 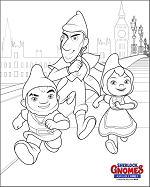 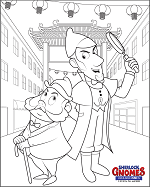 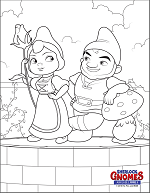 To help inspire your creative crayon-ery, here are some astounding gnome facts even Sherlock himself hasn’t deduced:

The first garden gnomes were made in 19th-century Germany and were called “Gnomen-Figuren,” meaning miniature figurines. We’re still “figuren” out what’s up with the hats.

Actually, to that point (see what we did there?), gnomes were said to wear conical hats and to be able to move through the earth itself as easily as we walk on top of it

While they originated in Germany, the gnomes spread quickly to France, and then to the United Kingdom when Sir Charles Isham brought 21 gnomes from Germany to his garden. The lone surviving original gnome is insured for £1M.

In the 1990s people began borrowing gnomes from neighbors’ lawns to take on their travels, sending photos of the globetrotting gnome-ads to the original owners. Even Amélie and Travelocity got in on the fun.

With today’s internet art explosion, gnomes of all shapes and sizes are available to help spruce up your outdoor space. Or terrorize it, in the case of the uncomfortably detailed zombie gnomes. Great for Halloween, or year-round if you want to be “that” neighbor.

Whether you’re #TeamRedGnome or #TeamBlueGnome, make sure to enter the contest to get your gnome swag on, and check out Sherlock Gnomes — available now in up to 4K + HDR.