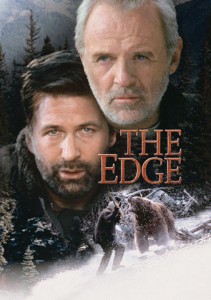 Jerry Goldsmith’s long and illustrious career as a film composer is highlighted by such notable titles as “Planet of the Apes”, “L.A. Confidential”, “Rudy”, several “Star Trek” films, and “The Omen”—for which he won his only Academy Award. One of his most memorable and (unfortunately) overlooked entries is The Edge, starring Anthony Hopkins and Alec Baldwin.

The film tells the story of Charles Morse (Anthony Hopkins), a know-it-all billionaire who retains an immeasurable amount of seemingly trivial facts. He’s married to a much younger fashion model, Mickey (Elle MacPherson), whom he suspects is having an affair with her photographer, Bob (Alec Baldwin). All are on a photo shoot in Alaska where Charles’ watchful eye catches the interactions between Mickey and Bob , essentially validating his concerns. When Charles, Bob, and Bob’s assistant, Stephen (Harold Perrineau) venture into the wilderness, their plane crashes. Stranded, facing hunger, hypothermia, and a blood-thirsty bear, the group struggles to survive in the hopes that rescue will soon come. Complicating matters are Charles’ increasing suspicion that Bob is using their situation as a means to kill Charles in order to have Mickey all to himself. 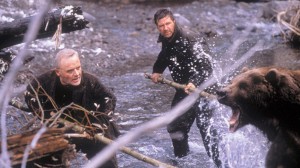 Everything about this movie clicks. Anthony Hopkins and Alec Baldwin play off each other so well that you would think they really were adversaries. Their interactions mirror their plight—at first they are cordial and civilized with somewhat scornful undertones. As their trials of being lost in the wilderness prolong, their primal natures take over, and the scornful undertones give way to unabashed contempt.

The screenplay by David Mamet has a great flow and ferocity to it. Also a noted playwright, Mamet’s signature style of dialogue is in full force here, bringing with it the snap and intensity that is felt throughout the movie. It sounds and feels natural, bringing great depth and passion to the extreme situations in which these characters find themselves.

It is Jerry Goldsmith’s musical score, though, that stands out as the true star of this film. The prominent use of brass, strings, and percussion echo the sense of adventure and horror the characters experience in the wilderness. The score brings with it a notion of hope, while at the same time portraying the despair that is running through the character’s minds. It is nothing short of brilliant, and the main theme will be playing in your head long after the movie is over.

The Edge was an overlooked film when it premiered in 1997, but it is starting to gain a steady following. The Edge is available on VUDU in SD, HD, and HDX! For this, and other great movies with memorable music, go to “Explore Catalog” and select the collection “Great Soundtracks.”

Alec Baldwin grew a thick beard for his character that he refused to shave. He was embroiled in a tug-of-war with the producers over this. Baldwin eventually gave into the producers and shaved—one day before filming began! This incident was dramatized in the 2008 film “What Just Happened”. The film was based on novel written by Art Linson, also the producer of The Edge.