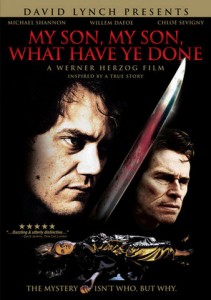 The pedigree of director-producers Werner Herzog and David Lynch is enough to make any fan of cult film salivate. In My Son, My Son, What Have Ye Done, the two auteurs have joined forces for the first time in their careers to create a film that is truly worthy of their affiliation. Lynch takes on the role of executive producer while Herzog directs from his own script the story of a man who has become obsessed with the play he is rehearsing which results in tragedy.

The man is Brad McCullum (Michael Shannon) who has just done something unspeakable—he’s killed his mother (Grace Zabriske). He retreats to his home where he holes himself up against the San Diego police department. Detectives Havenhurst (Willem Dafoe) and Vargas (Michael PeÃ±a) arrive on the scene attempting to piece together what happened. They meet Brad’s fiancée, Ingrid (Chloe Sevigny), and friend Lee, (Udo Kier) who provide insight into Brad’s state-of-mind. Through flashbacks, Ingrid and Lee paint a picture of Brad’s descent into depression and mental isolation. Brad became obsessed with his character in a Greek tragedy, a play in which his character also kills his mother. The detectives probe deeper, searching for the reason for Brad’s actions, and hoping to bring the tense standoff to a peaceful resolution.

As any fan of Herzog and Lynch know, their films often take you to an unsettling and uncomfortable place. There’s an eeriness that lingers throughout their films. My Son, My Son, What Have Ye Done is no exception. Michael Shannon delivers the ultimate in creepy performances, toeing the line of complete insanity. The audience never knows when he’s going to reach his boiling point, as at once he can reach a high level of furor, and in an instant, he can be calm and mellow. There’s a passive-aggressiveness to Brad that disturbs you, and keeps you wondering where his madness will take him next.

The supporting cast is a sobering Yin to Brad’s raging Yang. Everyone stays calm and collected, even as Brad falls apart around them. They keep the story grounded and real. They provide the anchor that we as an audience need in order to know that their world and Brad’s world are not the same. All around, the entire cast gives amazing performances, keeping their actions subtle and nuanced.

Shot with the Red One camera, the digital nature of the cinematography plays wonderfully with light. It is simultaneously rich and vibrant with color, and at the same time dark and murky. The color and lighting of the camera work add intensity to the mindset of Brad. The mixture of saturated hues and tones plays into the dual side of Brad’s psyche.

The collaboration between Herzog and Lynch is an instant classic in the cult genre. Here’s hoping that this is just the beginning of a long and happy marriage between the two that produces more gems that take us into the psychological unknown. For My Son, My Son, What Have Ye Done and other memorable cult classics, go to “Explore Catalog” and select the collection “Cult Directors.”

Though My Son, My Son, What Have Ye Done is based on the true story of Mark Yavorsky, a San Diego grad student who killed his mother in a similar fashion, director Werner Herzog admits that about 70% of the film is fictionalized.