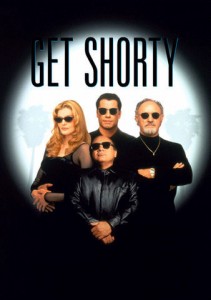 Who better to poke fun at Hollywood than Hollywood itself? In fact, Hollywood loves to skewer itself with films that go behind-the-scenes and expose the inner workings of Tinseltown. One of the best movies to do this is director Barry Sonnenfeld’s Get Shorty. Based on the novel by Elmore Leonard, Get Shorty essentially equates the film industry to the mob. The film is an off-beat, quirky, and hilarious look at what happens when a mobster becomes a movie producer.

Said mobster is Chili Palmer, portrayed by John Travolta at the height of his career in the mid-90s. Chili is a loan shark with a love for the movies. He is sent to Vegas to collect an overdue debt from a man who faked his death. While there, a casino hires Chili to collect from Harry Zimm (Gene Hackman), a schlock movie producer. When he meets Harry, he takes the opportunity to pitch him a movie. Harry and Chili hit it off, and soon they become partners in a movie Harry believes will be his greatest hit. Chili soon realizes the movie business is much like the mob—full of shady investors and egotistical prima donnas. However, Harry’s money troubles go beyond the casino as his current investors (Delroy Lindo, Jon Gries) are demanding their money back. Now Harry and Chili are caught between the investors and Chili’s mob boss from Miami, Ray “Bones” (Dennis Farina), who comes calling to finish Chili’s original job. 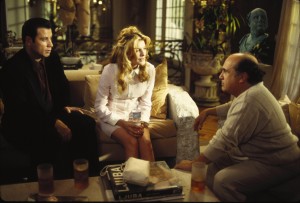 Get Shorty is a who’s who of Hollywood in the 90s. Along with Travolta, Hackman, Lindo, and Farina, the film co-stars Rene Russo as a washed up B-movie actress looking to make a comeback as a producer with Chili and Harry. Also starring is Danny DeVito, Hollywood’s it-man and potential star of Chili and Harry’s flick. Guest stars and cameos abound with James Gandolfini, David Paymer, Bette Midler, Alex Rocco, Harvey Keitel, and Penny Marshall all making an appearance. Even though Travolta is the star, the movie is a true ensemble piece.

Get Shorty snaps with dialogue that oozes the swagger and cool of Elmore Leonard. The funniest moments come when people get in too deep and way over their head—from Harry thinking he can handle the mob on his own, to “Bones” thinking he can do anything without consequences. Perhaps the true highlights, though, are all the jabs and barbs slung at Hollywood, painting the business as full of people who don’t know what they’re doing. The film implies that as long as you have cash, you can be a Hollywood producer—you don’t need to know anything about making a movie; all you have to do is hire someone who does.

The pitch perfect cast and the snarky humor make Get Shorty the ultimate insider comedy that is not to be missed. Now you can rent Get Shorty throughout the Labor Day weekend in SD, HD, or HDX for just 99 cents. From 9/3 through 6/6, you can watch this film and 24 others, including New Releases like “Cop Out” and “Green Zone”, as part of our Labor Day sale. Go to “Explore Catalog” and select the collection “Labor Day Weekend 99c Rentals.”

Robert De Niro, Dustin Hoffman, Michael Keaton, Al Pacino, and Bruce Willis all turned down the role Chili Palmer. John Travolta was going to turn down the role as well, until Quentin Tarantino convinced him to do it.