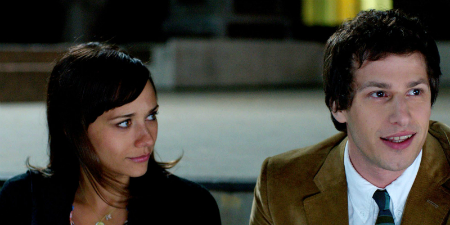 Can films forecast the future? When it comes to VUDU, perhaps so.

“Celeste and Jesse Forever” is a 2012 romantic dramedy about the bittersweet relationship between a professional trends forecaster, Celeste (Rashida Jones), and her unemployed, soon-to-be ex-husband, Jesse (Andy Samberg). In the first three minutes of the film, not only are we introduced to Celeste and Jesse, but we learn a little more about Celeste’s professional (and maybe personal) opinions on the future, which happily include VUDU.

As Celeste and Jesse drive through downtown Los Angeles in their Prius singing along to the song “Littlest Things” by Lilly Allen, Celeste receives a call. It’s work, and she has to quickly provide a sound byte to the Los Angeles Times. As Jesse lights up a cigarette, Celeste says into her cellphone: ‘This year all trends will head towards simplicity and comfort. Things like Roku, VUDU, cookbooks and casual wear will see a spike in the market.’ Right before she hangs up she asks Jesse in a whisper if she can have a drag. He then hands her the cigarette and she throws it out the window–since smoking, obviously, isn’t trendy in movies anymore.

Rashida Jones said in an interview that she, along with her co-star Will McCormac, wrote the script four years prior to its production in 2011, which makes Celeste’s prediction especially prophetic. In 2008 VUDU only existed as a limited number of set-top boxes, but has since grown by leaps and bounds into full-feature video-on-demand service available on millions of devices with millions of users that rely on us for convenience, simplicity and, of course, great movies like “Celeste and Jesse Forever.“