Going the Distance isn’t your standard cookie-cutter romantic comedy—and that’s a good thing. It’s full of adult content and language that is usually censored from romantic comedies. The inclusion of this kind of content speaks to a new generation of movie goers, and adds a new kind of realism that many couples deal with. Of course, they go to the extreme in some cases, but overall, the relationships in Going the Distance are more believable than what most films portray. Unfortunately, Going the Distance came and went from movie theaters so quickly that few people got the chance to see it, as box office results show. It’s a shame, too, because this quirky and offbeat romantic comedy is a welcome and fresh addition to the genre. Now Going the Distance is available to own on VUDU for under $10, and is available to rent in SD, HD, and HDX.

Going the Distance stars Drew Barrymore as Erin, a grad student hoping to make it in the world of print journalism. Justin Long is Garret, a talent manager at a small record label. Erin and Garret have a chance meet up at a New York area bar where they discover a mutual attraction to each other. They hook up back at Garret’s apartment, but the following morning, Erin reveals she wants to keep things casual. She’s only in New York for six weeks while she interns at a newspaper before she has to go back to school in California. However, their relationship over the next six weeks gets more serious than either of them thought it would. They are both heartbroken on the day Erin has to leave, but rather than giving up on a good thing, they agree to try a long distance relationship. With a country between them, they do everything they can to stay in touch, but each other’s respective profession keeps getting in the way of them being together. Now, they have to decide if they should take the risk of sacrificing their jobs for love.

Drew Barrymore and Justin Long have amazing chemistry that is reminiscent of the Tom Hanks-Meg Ryan films of the 90s and the Spencer Tracy-Katherine Hepburn films of the 40s and 50s. They play off each other so well that it adds a layer of believability to their relationship. The cast and crew and both said there was a heavy amount of improvisation that went into filming the movie, but because they play off each other so well, it comes off as seamless and natural. Improvisation requires a great deal of trust for it to be convincing. Their improvisation is flawless, making their emotional highs and lows that much more impactful on the audience. 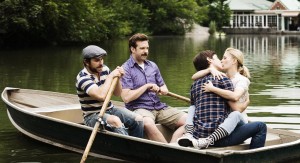 The supporting cast features up-and-coming comedy stars Charlie Day and Jason Sudeikis as Dan and Box, Garret’s best friends, as well as comedy veterans Christina Applegate and Jim Gaffigan as Corinne and Phil, Erin’s sister and brother-in-law. The scenes featuring them offer great wacky and awkward humor, including a great scene where Garret first “meets” Corinne and Phil during an amorous encounter with Erin. The scenes featuring the supporting cast may seem tangential at times, but they provide a deeper look into the lives of Garret and Erin. They also help ease (and sometimes amplify!) the anguish Garret and Erin feel when they are apart from each other.

Drew Barrymore is quickly becoming Hollywood’s go-to actress for romantic comedies. Having starred alongside a long list of A-list actors (e.g. Adam Sandler in 50 First Dates, Hugh Grant in Music and Lyrics, Jimmy Fallon in Fever Pitch), Barrymore has more than proven she has the comedic chops to hold her own with them. Going the Distance is further proof that Barrymore is destined for comedic greatness. Justin Long is finally getting his due as the funny leading man, having previously mostly taken supporting roles. Here’s hoping that more films featuring the tandem of Barrymore-Long are in store for the future.

The indie band featured in the film, The Boxer Rebellion, is a real band based out of London. The band got the movie gig after a performance at Hollywood’s famous Troubadour club caught the attention of director Nanette Burstein. They have already promised to be in the sequel, should there be one.