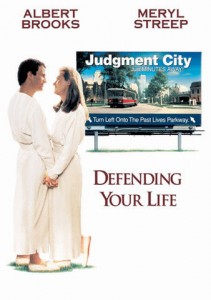 Albert Brooks is Daniel Miller who dies in an unfortunate accident on his birthday. He’s immediately transported to Judgment City, a modern-looking city where he learns he’ll be on trial for his life. In order to “move on”, he’ll have to prove that he was able to conquer his fears while on Earth, otherwise, he’ll be sent back to try again. While exploring one of the many amenities Judgment City has to offer, he meets Julia (Meryl Streep), a single mother who also died from an unfortunate accident. They hit it off and begin dating. Daniel soon realizes, though, that their lives on Earth were quite different. It becomes clear to him that Julia will most certainly move on, and that he will probably go back to Earth. Now he has to convince his judges that he deserves to move on so he can be with Julia.

Brooks’ humor is delightfully quirky, and his dialogue snaps with wit and sarcasm. The performances by all the actors are pure bliss. It’s a shame Brooks never became the comedic star he deserves to be. He brings great humor and depth to a character who is looking to be more than he can be, but is suffering the consequences from his previous life. Meryl Streep is amazing as Daniel’s love interest, Julia. She is clearly having a lot of fun with her character—a care-free, roll-with-the-punches type of person. She takes what is given to her and makes the most out of it. It’s a shame Meryl Streep doesn’t do many comedies. It becomes a treat, then, when she does show off her comedic chops. Rip Torn nearly steals the show as Bob Diamond, Daniel’s attorney. He brings great charisma to his role. His scenes with the opposing attorney (as played by the versatile Lee Grant) are to die for, as they exchange verbal jabs regarding Daniel’s life.

Perhaps the most intriguing aspect of Defending Your Life is the setting itself. Judgment City is the place we all wish we could live (as long as we weren’t dead!). It’s as close to a perfect paradise as you can get. Everything’s free, you have your own hotel room, there is no shortage of activities, and the best part—all the food you could ever want to eat and you won’t gain a single pound. One of the more interesting activities revolves around the Past Lives Pavilion, where you can see who you were in all of your previous lives. This proves to be a very funny scene, as people are shocked and amazed by who they used to be.

Defending Your Life is a perfect romantic comedy that is sure to please. The soundtrack is catchy, light, and whimsical, and will have you humming it for days after you’ve finished the movie. Defending Your Life is now available on VUDU to own for under $5. For this, and other great films, go to “Explore Catalog” and select “Steals for Under $5”. This movie is a real treat, so don’t pass it up.

Albert Brooks is a true Hollywood renaissance man. He’s acted, written, and directed in seven films. He’s also an accomplished voice actor, having appeared in numerous episodes of “The Simpsons”, The Simpsons Movie, and Finding Nemo.