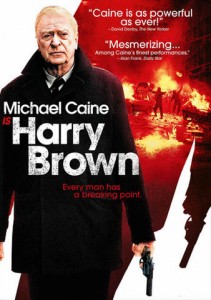 The revenge flick has always been a Hollywood staple, and in recent years, a new sub-genre has emerged: revenge flicks starring middle-aged or older stars. Clint Eastwood, Mel Gibson, and Liam Neeson have all taken on this role. Now, Michael Caine joins those ranks as the eponymous Harry Brown. As Harry, Caine excels in his performance as a pension-earning retiree who has been pushed to the limit.

Ex-Marine Harry Brown lives in a rundown apartment complex that is plagued by a gang of teenage drug pushers and murderers. Harry is indifferent to their actions at first, as he is completely consumed by his comatose wife and the prospect that he’ll soon be alone. He spends his days at the hospital visiting her; in the evenings, he frequents the local bar where he plays chess with his only friend. On his wife’s final night, he misses the opportunity to be with her one last time as the gang is blocking the shortcut to the hospital. Harry’s friend, also fed up with the gang, vows to stop putting up with their harassment and promises to do something about it. When his friend is brutally murdered by the gang, Harry realizes the local police are powerless against the gang and decides to take the law into his own hands. 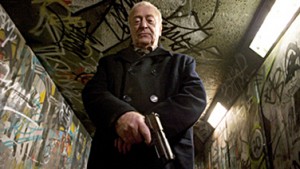 Harry Brown is a brutal and enthralling depiction of a man who has nothing to. Michael Caine’s portrayal of Harry Brown is nothing short of brilliant. His performance harkens back to his role of Jack Carter, the out-for-revenge professional killer from 1971’s Get Carter. It is as if this film was meant to examine what Carter might have been like 40 years later. However, Caine’s Harry Brown is much more developed than the Carter character. Harry is out to rid his world of the filth and scum who control it, all the while retaining his humanity and helping those caught up in the gang world.

The amazing supporting cast is mostly full of unknowns, save for Emily Mortimer’s Detective Inspector Alice Frampton. Alice is the only one who suspects Harry might be behind the recent upswing in gang deaths. She’s mostly ineffective as a police officer as no one around her will listen to, or believe, her. However, she’s there when she’s most needed. Her sullen and soft-spoken character perfectly echoes the sentiment that Harry feels is the true problem: the gangs are too powerful even for the police to handle.

Be forewarned that this movie is rated R for a reason. There is plenty of violence, most of which is graphic and blood-filled. If you can tolerate the gore, you’re in for a real treat. Harry Brown provides a fine display of acting, a powerful and haunting musical score, and a gritty and honest representation of a world most of us do our best to avoid. Harry Brown is one of those underrated flicks that most people passed on at the box office. Now’s your chance to catch it on VUDU and see what has all the critics raving.

Harry Brown can be yours to own for under $10.

Michael Caine was born Maurice Joseph Micklewhite. He changed his name, at the advice of his agent, after seeing an advertisement for the film “The Caine Mutiny”.