We’ve launched a new video today to share the benefits of our In home Disc to Digital program!

Now we all love our DVDs and Blu-rays, but even Bert DiVietri, a San Francisco standup comedian who plays the main character in the video, admits collections can get out of hand. We caught up with Bert to talk about comedy, VUDU, disc to digital and DVD/Blu-ray collections.

V: How long have you been a comedian?

B: About 6 years now. I moved to San Francisco from the mid-west and started doing standup as well as voice-overs and acting in some videos, AND I have a sketch group called “Don’t Watch This Show LIVE!”

V: When did you know you wanted to do standup? And how would you describe your comedy style?

B: I wanted to do standup ever since I saw it when I was a child. My comedy idols are Jim Carrey, Tom Green and Nick Swardson. And my style of comedy kinda reflects all them quite a bit. It’s nothing like the Red Hot Chili Peppers’ last 3 albums; I can say that with confidence.

V: What did you think about VUDU when you first started working on this video?

B: Well I had heard of VUDU before, but wasn’t a big digital video guy. I buy a lot of DVDs and Blu-rays actually. Some of those DVD’s are mine but I need to make it clear that not all of them belonged to me. Having all those DVDs would mean I’d watched them all; which would mean I never leave my house. I feel like I wouldn’t be able to leave for another 50 years with all those DVD’s. Also it’s a commercial; that was not even my house.

V: Tell us about the character you created.

B: I was trying to be exactly like Jonah Hill in Moneyball. I think I nailed it. Also see that massive nerf gun next to me? Mine also. I brag about Nerf Guns. 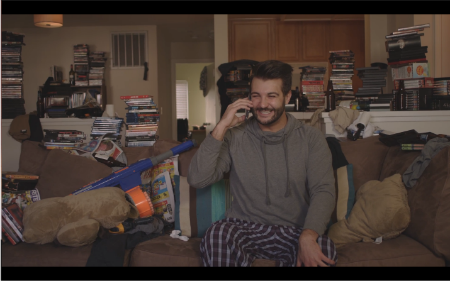 V: What did you think when you first learned about Disc to Digital?

B: It was like a light bulb. A big “duh, why didn’t I think of that.” There have been times when I’ve been at a friend’s place and we wanted to watch a movie that I actually have, but didn’t feel like running home to grab. Having a copy in the cloud makes a lot of sense.

V: Would you ever get rid of your DVDs and Blu-rays?

B: Nah, I like having a collection. Basically in like three hours, my place would look like that mess again. Bur for new movies and shows I’m definitely considering just going all digital. It’ll be some combo.

V: So what is your favorite movie and TV show at the moment?

B: That’d be Wolf of Wallstreet. That movie was like Goodfellas for [censored]. I can’t wait to get it on Blu-ray and on VUDU ASAP! I am all about the digital baby. Because I know my friends are going to borrow my Blu-ray and forget to give it back. Also Homeland was my last favorite show. Sgt. Brody rules so hard.

V: The Vulcan hand salute was hilarious. Whose idea was that? And the popcorn?

B: Ha. Those were mine. We did a lot of takes and I was just messing around and trying to have fun. I took a tip from Jim Carrey. It’s just you and the camera, and you have to make something from nothing and hope to God it is funny or at least entertaining. I think it paid off. He is my idol. 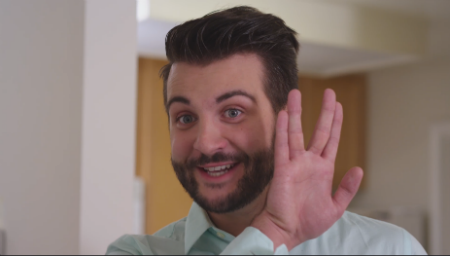 V: So Bert, did your character even get a second date?

B: No. My fiance in real life would not be happy about that. Besides that she isn’t my type, she thought Jean-Luc Picard was a French luggage brand.

Check out more of Bert’s comedy and work at www.bertcomedy.com

Learn more about VUDU’s In home Disc to Digital.