Winter’s Bone is the type of movie that exemplifies independent cinema: there is no big budget; there are no big name actors. There are face and name recognizable actors, but in Winter’s Bone they take on supporting roles. There is a realness and rawness to the film that is rarely seen in Hollywood cinema. The movie also does what many independent films do best: it takes a little-to-unknown actor, captures their amazing performance, and launches them into prominence.

Winter’s Bone stars Jennifer Lawrence as Ree Dolly, a seventeen-year-old in the unenviable position of having to raise her younger siblings and care for her mentally-impaired mother. Her deadbeat father is on the lam, evading prosecution for cooking meth. Ree is informed by Sheriff Baskin (Garret Dillahunt) that her father put up their house and land for his bail bond. If Ree’s father fails to show for his court date, the bail bond company will seize control of the house and land. Ree vows to locate her father to prevent that from happening. Now she’s forced to enter the seedy underbelly of her community, encountering her father’s known drug associates and her uncle, Teardrop (John Hawkes), a terse, strict, and violent man, all to save her family from homelessness.

Jennifer Lawrence delivers a star-making, potentially Oscar-nominated, performance as Ree Dolly. She carries the weight of the world on her back with anguish and turmoil frozen in her eyes. With her world falling apart, however, she somehow stays positive, a glimmer of hope behind the anguish and turmoil. The opening of the film paints her hardship perfectly, tending to house chores commonly associated with a parent—laundry, cooking, caring for the young children. Her distress is more evident when she takes her siblings to school and she sees people her age doing the things people her age should be doing. However, she doesn’t let this overwhelm her; she perseveres. Her strong-willed and resolute performance is something rarely seen in young actors, and she pulls it off with the finesse often reserved for veteran performers. 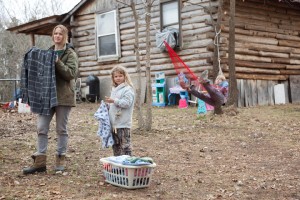 The directing and cinematography are also highlights in Winter’s Bone. The muted color palette is heavy on browns and pastels, perfectly capturing the locale of the Ozark Mountains. In a world where things are falling apart for Ree, so too are the places around her: buildings and homes are worn down, in desperate need of repairs and paint jobs. The world the director and cinematographer have created allows the audience to be completely absorbed into Ree’s universe. There’s a general sense of uneasiness in the setting and atmosphere, further emphasizing the tremendous trials and tribulations that Ree has to endure.

Winter’s Bone premiered at the 2010 Sundance Film Festival to great acclaim. It won the Grand Jury Prize in the Dramatic Competition, as well as the Waldo Salt Screenwriting Award. Winter’s Bone is quickly wowing critics and audiences alike for its taut and gritty performances. As award season starts rolling around, this movie is a shoo-in to take multiple nominations for its cast and crew. Winter’s Bone is now available to own or rent in SD, HD, and HDX. Go to “Explore Catalog” and select the collection “Bargains Under $10” for this and several other great movies.

The effects of Winter’s Bone have already launched Jennifer Lawrence into stardom. She already has a heavy development slate, including the upcoming “X-Men: First Class”.