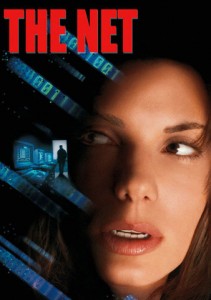 Before “The Social Network”, before “Catfish”, there was The Net, a cyber-thriller from 1995 that solidified Sandra Bullock as Hollywood’s next leading lady. Back when the Internet was just hitting the mainstream, The Net would prove to be highly prophetic, introducing us to the fear that our entire lives can be manipulated by a single keystroke.

Sandra Bullock stars at Angela Bennett, a computer software engineer and programming expert. She comes across software that gives her access to secret files and databases. What she mistakes for a glitch soon proves to be a much deeper conspiracy. She quickly finds herself on the run, as the conspirators have erased any and all records of her life, and replaced her identity with that of a criminal. With no one around to prove she is who she says, she sets out to clear her name by stopping the conspirators who threaten to control everyone’s lives.

Having previously been featured in supporting actress roles, 1995 was the year when Sandra Bullock made the leap to leading actress with roles in The Net and While You Were Sleeping. It turned out to be perfect timing, as While You Were Sleeping showed her romantic comedy side, and The Net showed she could handle drama and action. Bullock does an excellent job portraying someone whose world is falling apart. She’s fragile and vulnerable, but at the same time empowered and confident. She stays resolute, never letting her opponents get the better of her. She fights through the adversity, staying strong-willed. She is able to display a wide range of emotional complexity that many actors rarely display in their debuts as acting leads.

Also exceptional is Jeremy Northam who portrays Jack Devlin, the main antagonist to Sandra Bullock’s character. Making his American cinema debut, Northam’s Jack Devlin is a suave and dashing villain who first lulls Angela into a false sense of security. He uses his charm and finesse to seduce her and gain her trust. In an instant, he turns on her and reveals his true sinister nature. The charismatic and enchanting villain is never a role that is easy to pull off, and Northam does so without any sense of trepidation.

Computer graphics, systems, and the Internet have made significant technological advances since 1995. To watch this movie and see old operating systems, video games, and dial-up modems, which were quite ahead of their time then, are almost laughable by today’s standards. But the prophetic concepts of identity theft, invasion of privacy, and entrusting our lives to computers are still notions that plague the world today. Given that the Internet was in its infancy at the time the movie came out proves that The Net is a movie that can stand the test of time and still be an enjoyable thrill ride.

The Internet and cyberspace are rarely shown in a positive light in films. They are always gateways to danger and crime, as would be seen in later films such as Hackers, Antitrust, and Hard Candy. Even new films like “The Social Network” and “Catfish” now hitting theaters deal with the negative aspects of what the Internet can do. But always remember The Net was one of the first to do it. You can own The Net on VUDU for under $5. Go to “Explore Catalog” and select “Steals for Under $5” for this and other great titles.

The Net is a not-so-subtle endorsement for Apple/Macintosh computers. If you watch closely, all the good guys use Macs, while all the bad guys use PCs with Windows-based systems. Director Irwin Winkler is a huge Mac supporter, and this movie came out during the intense Mac/Windows rivalry of the 1990s.