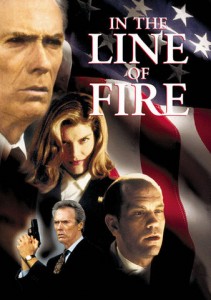 1993’s In the Line of Fire features a concept that is rarely seen in Hollywood nowadays—an aging action star who actually deals with being old. Clint Eastwood’s Frank Horrigan is out-of-shape, past his prime, and overdue for retirement. Recent Hollywood films would have us believe that aging action stars can do anything without effort, as long as they throw in the random quip of “being too old for this.”

Frank Horrigan is the only active Secret Service Agent who was around when JFK was assassinated. Frank also blames himself for being unable to save JFK on that fateful day. With his new partner, Al (Dylan McDermott), Frank investigates counterfeiters and assesses threats to the President. While investigating a new threat, Frank discovers that a potential assassin isn’t just targeting the President, but Frank as well. Frank has to convince his superiors that the threat is real, and he must do everything he can to prevent history from repeating itself.

Where most action films with aging stars focus on high-concept action sequences, In the Line of Fire focuses on the mystery and suspense involved in the cat-and-mouse game between Frank and Mitch. There are a few action sequences, and when they play out, they portray realistic concepts of how an older action star would perform: Frank gets out of breath, he can’t keep up with the younger Mitch, and he can’t take on dangerous stunts without suffering the consequences. This humanistic performance lends to the film’s credibility.

As well, the focus on the cat-and-mouse game allows events to unfold as a battle of wits between Frank and Mitch. They must rely on their mental abilities, rather than their physical prowess (or lack thereof), to foil the other. Blows are meted out as Frank outsmarts Mitch, and vice versa, rather than through physical altercation. It adds to the tension to see them get into each other’s heads. The movie wouldn’t be the same if it was two guys beating each other up. The audience is often left to wonder who is the cat and who is the mouse.

Clint Eastwood is in top form as Frank Horrigan. Having been the action star all his life as a cowboy or a cop, he plays his character perfectly as a man on the decline. He’s a multi-faceted man, distraught over the mistakes of his past and steadfast in his desire never to let his mistakes repeat. John Makovich’s Mitch Leary proves an excellent adversary. There’s a method and reasoning to his madness that sets him apart from a one-dimensional wacko. He’s confident and collected, and his decisions are made with precision and accuracy. Watching the two play off each other is masterful to say the least.

In the Line of Fire is an excellent, fast-paced thriller that is not to be missed. It will keep you on the edge of your seat all the way to the mind-blowing climax. In the Line of Fire is now available on VUDU for under $5. For this, and other great modern-day classics, select “Movies on Sale” and then “Steals for Under $5.”