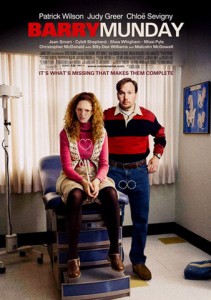 Patrick Wilson is quickly making a name for himself as Hollywood’s next dashing, leading man. He has shown a talented range, appearing in everything from dramas and mysteries to romances, musicals, and comic book adaptations. There isn’t a genre he’s afraid to touch. With his latest film, Barry Munday, Wilson can add romantic comedy to the list, playing the titular character, who also happens to be anything but dashing.

Barry Munday is the kind of wannabe ladies man/sleazy pick-up artist that most sensible women would avoid. He’s crude, he’s tactless, and is only interested in his next hook-up. One day he sets his sights upon a young lady at a movie theater which ultimately proves to be his downfall. Six hours later, he wakes up in a hospital and discovers that he’s suffered a major loss—his testicles. Having lost his mojo, he quickly becomes un-Barry-like. When he receives notice that he’s facing a possible paternity suit, he realizes this may be his only chance to carry on the Munday name. Much to the chagrin of the soon-to-be mother, he vows to take full responsibility and be involved as a father.

Wilson has no problem downplaying his good looks to play a slightly paunchy, average, every day kind of guy. Given the tone and style of the film, it was imperative he do so to sell Barry as a loser, which he pulls off with ease. Wilson shows his comedic chops with all of Barry’s quirky and awkward sensibilities. In fact, it is the awkwardness that generates the most laughs throughout the film. With each cringe-inducing awkward moment Barry finds himself in, he manages to make us burst into laughter as the results unravel around him. 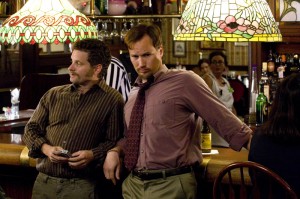 Wilson is surrounded by a talented supporting cast that enhances the humor. Judy Greer is a riot as the soon-to-be mother of Barry’s child. Greer also downplays her good looks to portray the homely and undesirable Ginger Farley. Chole Sevigny plays Jennifer Farley, Ginger’s younger sister Jennifer, the pride and joy of the Farley clan. Jennifer has an odd attraction to Barry that creates great humorous tension whenever they share a scene. Jennifer and Barry’s interaction leads up to a hilarious scene that involves inappropriate conversation at a family dinner, a strip club, and potential case of mistaken identity. The funniest moment in the film, though, comes in the form of a testicular loss support group featuring cameos by Christopher McDonald, Kyle Gass, and Matt Winston. The scene is at the same time humorous and heart-wrenching as these gentlemen share their afflictions.

Adapted from the novel by “Life Is a Strange Place” by Frank Turner Hollon, Barry Munday is an enjoyable comedy that any fan of Judd Apatow or Mike Judge should watch. Avoid the hassle of theater parking, high concession prices, and sticky theater floors by watching Barry Munday from the comfort of your own home. Barry Munday is available to rent on VUDU now – before it hits theaters in October.

Patrick Wilson got his start in showbiz, not on the silver screen, but in the bright lights of the theatre. He has appeared in several hit Broadways musicals such as “The Full Monty” and “Oklahoma!”.