Rarely does a film come out that deserves so much praise and attention, but today we’re lucky to have one. Wadjda has broken barriers in both story and production, and we’re proud to offer such an amazing film to own on VUDU.

Wadjda is the story of a young girl with big dreams and a tenacious character. All she wants is a bike. But here’s the catch: Wadjda is 10 years old and the only daughter in a traditional family in Saudi Arabia. The religious and social structures of an Islamic nation permeate the movie and we are constantly reminded (though not heavy-handedly). “Where is your headscarf?” a teacher reprimands. Wadjda’s father is almost non-existent, and focused on finding another wife with hopes of having a son. According to Wadjda’s mother, a bicycle will take the virginity of a girl.

Yet for all the frustration, hope and coming-of-age moments that are put in front us, the real story may be behind the scenes.

Wadjda is the first film shot entirely in Saudi Arabia—a place where cinemas are banned and effectively a death-knell to any investment in film. The director, Haifaa Al-Mansour, is a woman. Since in Saudi Arabia a woman is severely limited in her interactions with men, Haifaa often had to direct from inside a van and watch the actors only through a screen. She is also the first female filmmaker in Saudi Arabia.

Wadjda took Haifaa a grueling five years to make, but ultimately it paid off and Wadjda premiered at the Venice Film Festival in 2012. It has gone on to be nominated for over 16 major awards and holds a rare 99% fresh rating on Rotten Tomatoes, and a full 5/5 ★★★★★ star VUDU community rating.

Watch it today on VUDU.

VUDU’s End of Year Sale is on NOW!

It’s our biggest and best sale of the year. 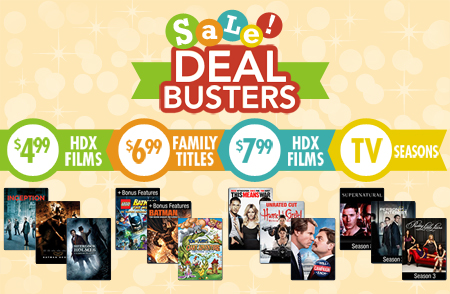 Our Deal Busters sale runs from 11/28 to 12/2, with HDX titles available to own at $4.99 and up.
Check out the available titles here: DEAL BUSTERS SALE