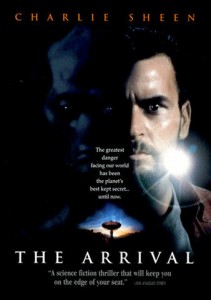 In the 1990s, the concept of global warming was beginning to gain credibility as a worldwide issue. In the mid-90s, Hollywood hypothesized the effects global warming could have in Waterworld, a film about a post-apocalyptic world where the polar ice caps have melted. Almost a year later, another film would explore global warming, albeit in a far different way. David Twohy’s science fiction thriller, The Arrival explored the notion that climate change was the product of something much more sinister.

Charlie Sheen stars as Zane Zaminsky, an astronomer working on the SETI project—the Search for Extraterrestrial Intelligence. With his partner Calvin (Richard Schiff), they discover a signal from a distant star. However, the signal is too brief for them to authenticate. They are unable to receive support from their boss (Ron Silver), who dismisses the signal as invalid. Obsessed with proving he’s correct, Zane sets up a home satellite system. He rediscovers the signal, only this time it is coming from Earth being sent into space. He tracks the signal to Mexico. He travels there where he meets Ilana Green (Lindsay Crouse), a scientist investigating the dramatic and potential climate change that is plaguing the world. Following the signal’s destination, he uncovers an alien conspiracy, where aliens are pumping greenhouse gas into the atmosphere to raise the temperature. Realizing the alien signal and rising temperature are related, he sets out to expose the conspiracy to the world.

Charlie Sheen might not seem like the most likely choice to headline a science fiction thriller given his current status as star of television’s highest rated sitcom. But before sitcom stardom, Sheen proved his versatility by appearing in everything from sports and war films, to action and dramas. Indeed, as Zane, he proves he has the ability to tackle any role in any genre. He does an amazing job as a man obsessed and utterly paranoid, necessary for any leading star of a conspiracy tinged film.

Twists and turns abound in The Arrival. As with any movie dealing with conspiracies, no one can be trusted, and no one is who they appear to be. David Twohy, who pulled double duty as writer and director, has crafted a taut and engrossing story that pumps up the adrenaline and never slows down. It is more of a mystery story with elements of science fiction thrown into the mix. Sheen’s Zane character is essentially a detective hunting for the truth. It even contains elements of classic noir: a damsel in distress, a shady organization, and even a femme fatale, played perfectly by then unknown actress Teri Polo. As Zane delves deeper and deeper into the mystery, we are taken along for the ride as we try to solve the puzzle with him.

The Arrival has gained notoriety as a cult classic. It’s a great spin on the classic story of alien invasion and aliens living among us. Considering the film’s modest budget, the special effects are excellent, and effectively enhance the film as a whole. The Arrival is now available to own for under $5. Go to “Explore Catalog” and select “Steals for Under $5” for this and many other great films.

Waterworld, the other global warming science fiction film from the 1990s, was also written by David Twohy.