Since it’s generally a good rule of thumb that a movie with more than three writers isn’t worth your time or money, it may surprise you that one of the great classic comedies of the 1980s had seven writers. While a movie with this many writers is usually fraught with problems, Back to School, starring Rodney Dangerfield, succeeds with sidesplitting laughs that shouldn’t be missed. Maybe seven really is a lucky number. 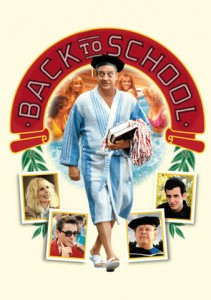 The great 1980s college-set comedy Back to School features Rodney Dangerfield in one of his few starring roles. Dangerfield also served as one of the seven writers, but with his comedy style, he had to be! Dangerfield plays Thornton Melon, a self-made millionaire who never finished high school. When he divorces his second wife, Melon heads to his son’s college to spend more time with him. While there, Melon learns that his son wants to drop out because he doesn’t fit in, has no girlfriend, and can’t make the diving team. He figures since dropping out worked for his dad, it’ll work for him, too. But Melon convinces his son to stay in school by promising to do it with him. Melon soon finds out that studying and homework aren’t for him, and that the partying lifestyle is the right one to live.

Dangerfield’s wit and sarcasm are in peak performance throughout the film. His trademark style of insult and off-handed humor keep the laughs coming at a mile a minute. Dangerfield’s Thorton Melon is the type of student we all wish we could be, or could have been. He’s carefree and popular, and always the topic of conversation. Of course, having an endless supply of cash means he can do just about anything to win someone over.

Most of the comedy comes from Dangerfield, and the amazing supporting cast is mostly there to keep the story moving forward. The supporting cast features Sally Kellerman (the English teacher he falls for), Burt Young (his surly and gruff limo driver), Ned Beatty (the college dean, comically named Dean Martin), M. Emmet Walsh (the aging dive team coach), Keith Gordon (his no-nonsense, by-the-book son), and in one of his first major acting roles, Robert Downey, Jr. (Thorton’s son’s only friend and roommate). But even with the supporting cast playing it straight, there’s never a dull moment as Dangerfield’s comedic presence is enough to carry the movie alone.

The film is a riot from start to finish, and now it’s available on Vudu for under $5 as part of our End of Summer Sale. Add Back to School to your digital collection today. And just what exactly is the Triple Lindy? Well, you’ll have to watch to find out.

Rodney Dangerfield didn’t become a movie star until he was almost 60! His first starring role was in 1980’s Caddyshack – also available on VUDU for under $5.