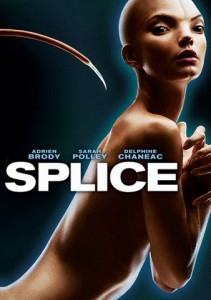 If film history has taught us anything, it’s that science should never tamper with nature. From the early days of cinema with Frankenstein to modern films like Deep Blue Sea, scientists meddling with nature invariably results in disaster. Director Vincenzo Natali’s latest science fiction thriller, Splice, is no exception to the rule. Natali has crafted a suspenseful and intriguing film that has instant cult classic written all over it.

Scientists Clive Nicoli (Adrien Brody) and Elsa Kast (Sarah Polley) have genetically engineered creatures from a variety of different animals in a process known as “splicing.” The purpose of these creatures is to take the best aspects of other animals in order to create a creature that produces certain proteins. These proteins can then be synthesized to develop drugs that can fight Alzheimer’s, cancer, and a variety of other diseases that plague mankind. Clive and Elsa want to take the next step—introduce human DNA into their experiment to achieve their goal. However, the pharmaceutical corporation that funds their research forbids them, ordering them to focus on their current experiment. Elsa convinces a reluctant Clive that they need to take the next step now while they have the opportunity. However, things don’t go as planned, as their new experiment soon gives birth to Dren (Delphine Chaneac), a human-animal hybrid. As Clive and Elsa struggle to hide her from their superiors, Dren begins to evolve much faster than anticipated, and soon develops violent tendencies that could threaten all of humanity.

As with other films where science goes wrong, the experiment is always initiated with the best of intentions. Clive and Elsa have a noble goal of wanting to cure human ailments, but their vision is short-sighted at best. Sarah Polley gives a versatile and disturbing, yet powerful performance as Elsa. She is completely obsessed with allowing Dren to live. Having grown up with an abusive mother, Elsa sees Dren as her chance to experience a childhood she never had. But Elsa’s family history rears its ugly head, and Elsa displays the abusive traits of her mother. Elsa and Dren’s relationship begins with great hope and love, but ultimately ends in tragedy.

Film history has shown that the “mad scientist” is often a man, so it is interesting to see here that Adrien Brody’s Clive would be the voice of reason, more often than not. However, he often proves too ineffectual. Though he objects to their experiment, he allows Elsa to push forward. His love and commitment to her prevent him from forcing her to stop. His love and commitment, though admirable, blind him from the horrors that are developing. Brody gives an excellent performance as the conflicted Clive, proving once again that he has the ability to take on any role in any genre.

With Splice, the true terror isn’t in the child-like Dren, but in the science itself. The concept of gene splicing is already happening in today’s scientific community. Science fact is rapidly catching up with science fiction—ideas like cloning and teleportation are now realities. Splice’s real horror comes from knowing that what is presented in the film might not be far off. As science and technology rapidly advance, the “what ifs” of science fiction become potential truths. Splice does a brilliant job of playing off this notion, effectively heightening the fear and suspense.

Splice isn’t a horror film, per se. It doesn’t have the conventions of a traditional horror film, but it does create the atmosphere of horror. Splice is the perfect way to kickoff October to lead up to all the thrills and chills of Halloween. Splice is now available to own on VUDU for under $10. For this and other movies of horrific science, go to “Explore Catalog” and select the collection “Science Gone Wrong!”