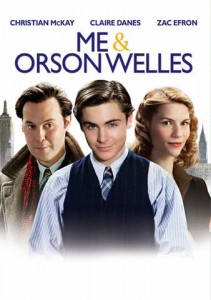 Me and Orson Welles is the culmination of acclaimed director Richard Linklater’s career. Having started with independent comedy-dramas, he’s segued seamlessly into the Hollywood scene with blockbuster comedies starring big name talent while still taking the time to experiment with other genres, such as sci-fi and animation. By proving he can make films that cross genres, it comes as no surprise that Me and Orson Welles is perfectly suited for Linklater. The film is a rare combination of dramatic period piece, comedy, romance, and coming-of-age all rolled into one. Linklater never lets one element overpower the other and brings yet another masterpiece to his repertoire of critical successes.

The film stars Zac Efron as Richard, an ambitious actor who catches the eye of Orson Welles (Christian McKay) who’s prepping his first performance of Shakespeare’s “Julius Caeser” at his newly opened Mercury Theatre. Richard soon falls for Sonja (Claire Danes), Welles’s production assistant, and quickly discovers the attraction is mutual. He gets swept up in the world of Broadway and theatre, becoming Welle’s protégé, and learns the reality of what it takes to make it in that world. 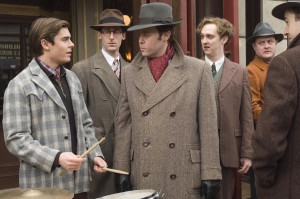 Zac Efron finally steps out of the shadow cast upon him as a teenage heartthrob to show that he has what it takes to be a serious actor. He certainly holds his own against a much more seasoned cast, and proves himself to be a worthwhile movie lead.

The real star of the movie is Christian McKay’s titular Orson Welles. He brings such command and bravado to every scene he’s in that he steals the show. He isn’t playing Orson Welles—he is the living embodiment of a Hollywood legend. He plays Welles perfectly, and even channels the wild mood swings that Welles’s was famous for. It is a shame that his performance was overlooked during last year’s award season. This film, though, should serve as his audition should anyone ever wish to do a full biopic on Welles.

The movie is quite simply the best movie about theatre (sorry “Waiting for Guffman”, sorry “Cradle Will Rock”) ever made. It delves into all the nuances and intricacies that happen behind-the-scenes, in the box office, and on the stage of a Broadway production. It features an impressive array of acting from the entire cast that brings 1930s Broadway to life. It is a film that is not to be missed.

Me and Orson Welles is now available digitally exclusive in HD!

Christian McKay’s career began in the theatre, where he portrayed none other than Orson Welles in a one-man show.